I don’t often make the monthly meetings for my local The Well Armed Women chapter, but when I saw we were taking a field trip to a local range and getting an introduction to shooting steel, I changed some plans so that I could attend.

The instructions specifically stated that we shouldn’t bring our CCW pistol as shooting steel with a sub-compact wouldn’t be fun. My first thought was no problem, I’ll grab “Gus” my Springfield XD9. Then it hit me. I COULD bring my CCW! 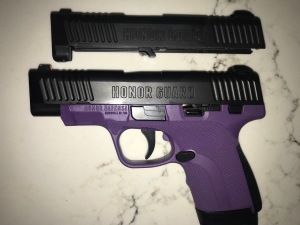 “Zeke” as he’s formally known, is my CCW. He’s an Honor Defense Honor Guard 9 mm (HG9). Ramping up Zeke’s coolness factor is the fact that he’s fully modular; all Honor Defense pistols are. Not only could I change my FDE grip to a Purple Rein grip to wow my TWAW sisters (because everything with TWAW is purple) but I could also change out my slide and barrel for a longer slide! That’s right, I could take my CCW and change it up to something I could shoot steel with. And shoot steel I did!

I’ll admit my first few shots were abysmal. I’d never shot my Honor Guard with the long slide, not to mention my nerves because I assembled the gun on my dining room table just hours before.

The shoot went well. I shot plates, static targets and a Texas Star with my Honor Guard while everyone else bragged about their full-size guns. The instructors from the club were intrigued by my purple shooter. None had heard of Honor Defense. They were also baffled by the fact that I could just swap out the slide and barrel, changing my carry gun into something that was shooting steel like it was its job.

At the end of the night I’d done a lot of learning, a lot of educating, and a lot of shooting with the long-slide version of my carry gun. The versatility, the accuracy and the reliability make me love my HD more every time we go out! Now to swap my Purple Rein grip frame back to either my black, blue or FDE grip… I love having the choices that carrying a fully modular pistol afford me!